The heat transfer characteristic of supercritical CO2 is an essential research topic due to its significant influence on the performance of heat exchangers and systems. In this research, the heat transfer performance and pressure drop of three brazed plate heat exchangers serving as the gas coolers in a CO2 system are investigated. The heat exchangers belong to a tri-partite gas cooler which can simultaneously fulfill the demands of domestic hot water and space heating. The heat exchangers respectively function for the DHW reheating, SH heating and DHW preheating. The effects of the CO2 inlet pressure, CO2 inlet temperature, water inlet temperature, water mass flow rate and buoyancy force are analyzed. The experimental Nusselt numbers are compared with the calculated results based on the published correlations, and new heat transfer correlations are proposed to achieve higher prediction accuracy.

To investigate the heat transfer performance in the tri-partite gas cooler, a transcritical CO2 heat pump water heater system is established. The schematic diagram of the system is shown in Fig. 1. The system can operate under three modes: DHW operation, SH operation and DHW+SH operation.

The three brazed plate heat exchangers of the tri-partite gas cooler, which are represented as GC1, GC2 and GC3 (DHW reheating gas cooler, SH gas cooler and DHW preheating gas cooler), are developed by ALFA LAVAL. The used AXP14 model heat exchange plate has a dimension of 190 mm length by 76 mm width. The GCs have different functions: for the DHW heating demand, the inlet tap water is firstly preheated by the GC3, and then the intermediate temperature water flows into the GC1 and is reheated to the required high temperature; while the GC2 is used for the SH demand which has a moderate temperature level. The supercritical and high-temperature CO2 from the compressor successively flows through the GC1, GC2 and GC3, and exchanges heat with water in the counter-flow configuration.

It is worth mentioning that the brazed plate heat exchangers used in this research have two types of internal configuration: one-pass and two-pass, which is shown in Fig. 2. For the one-pass, it means that the water and CO2 flow between the inlet and outlet distribution ports without changing the flow direction, and thus the water and CO2 respectively flow upward and downward. While for the two-pass, the fluids in the heat exchanger deflect once, and both the water and CO2 flow first downward and then upward. In the experiments, the GC2 is always one-pass, and the GC1 and GC3 are tested both with one-pass and two-pass configurations. The tests based on the control variable method are conducted with the one-pass GC2 and two-pass GC1 and GC3. Besides, the experiments with the one-pass GC1 and GC3 are also carried out but the data is only used for analyzing the buoyancy force and the pressure drop, and ultimately fitting the heat transfer correlations.

(4) The heat transfer correlations of supercritical CO2 in-tube flow are unusable because the complex geometry of the brazed plate heat exchange. The correlation for supercritical fluid in plate heat exchanger from Forooghi and Hooman shows the best prediction accuracy but is still not satisfactory with the mean absolute relative error of 41.1%. Thus, new correlations with higher accuracy are established considering the effects of thermodynamics properties and buoyancy force. The mean absolute relative errors of new correlations are respectively 11.61% and 12.82% for the one-pass and two-pass configurations. Fig. 6 shows the comparison between experimental data and the calculated results based on the proposed correlations. 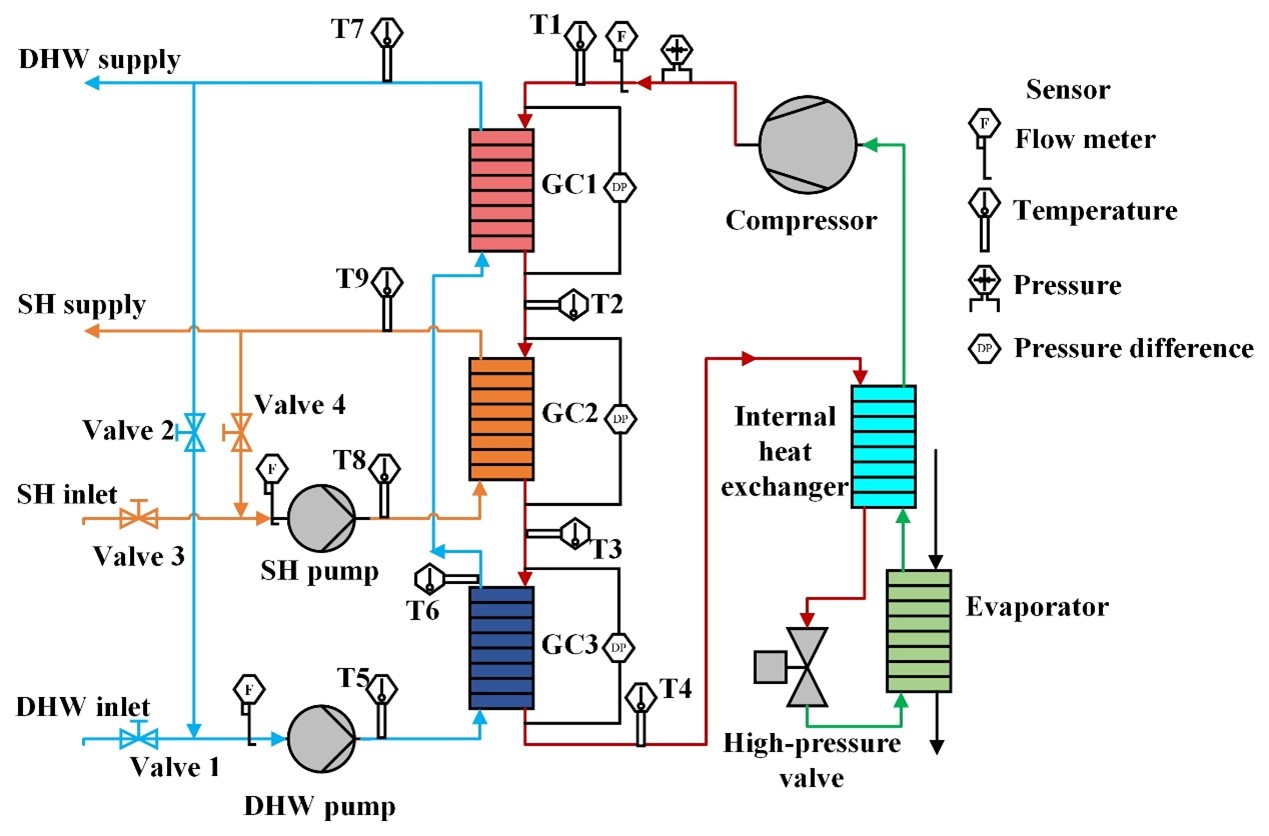